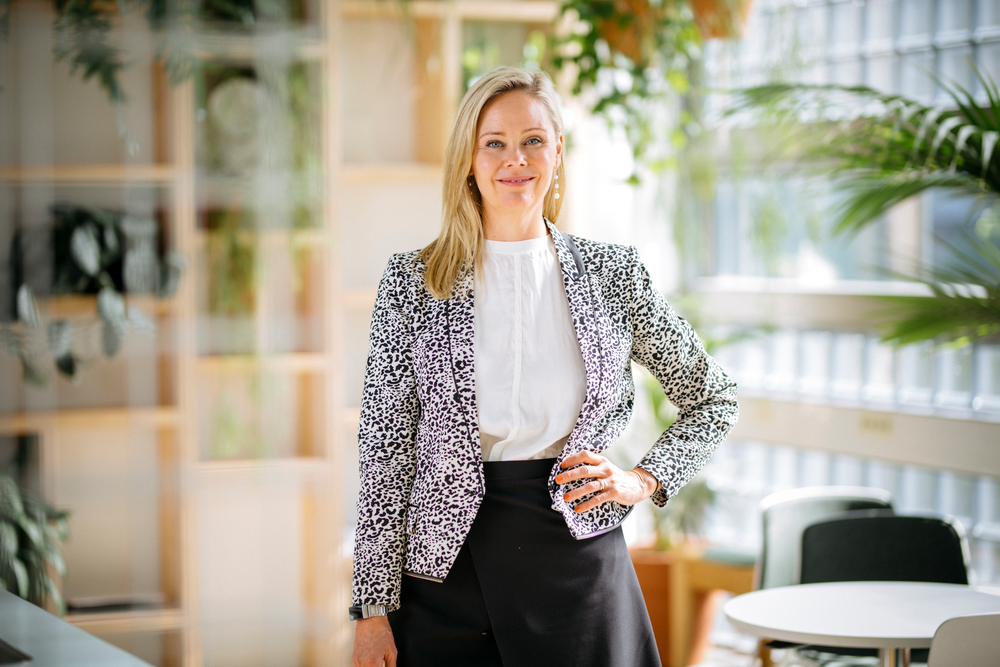 Veera Heinonen (Master of Political Sciences) is Director of the Democracy and engagement theme at the Finnish Innovation Fund Sitra. The goal of Sitra is to strengthen and develop Finnish democracy. Throughout her career, Veera has been, in one way or another, involved in the promotion of vital democracy. First as a journalist and a correspondent, then as a civil servant and a diplomat, and finally as the Director of Communications, both at the Ministry for Foreign Affairs and at the Office of the President of the Republic of Finland.

Democratic resilience has been put to the test in recent years, and citizens are losing their trust in institutions. What is the current state of democracy and how is it impacted by technological innovation?

One of the many reasons explaining this is the digital transformation. Modern technologies have had a profound impact on our information and data landscapes, with tools such as social media platforms providing access to an enormous amount of information. The transformation, or, as some might say, contamination of the information environment is putting tremendous pressure on liberal democracy, which stems from the idea that different perspectives and values are based on the same facts.

Why does the change in the information environment put pressure on democracy?

The information available to us is no longer filtered or curated like it used to be. The flow of unfiltered information contributes to polarisation in societies, since we rely on different information to create our knowledge base and understanding of our society. Digital communication technologies accelerate this polarisation as they enable misinformation and disinformation to spread at an incredible speed. As we have seen in liberal democracies, people in the political arena use entirely different facts. This was strongly evidenced by the COVID-19 crisis where emotional reactions seemed to override reasoned facts. This is a huge challenge for representative decision-making.

Is this a global trend or is there a difference between Europe and the United States?

In the United States the information environment has become extremely polarised. Media polarisation, also known as the Fox News model, is fuelling greater divisions within the country. It has had a major impact on discussion in social media, but also social discourse in the United States in general. These discussions are typically characterised by misinformation and even disinformation, which is dangerous for a liberal democracy.

In Europe, people can form a more comprehensive and informed picture of society, thanks to national broadcasting companies and general media consumption habits. Finland and the other Nordic countries excel here, to the point that the term ‘Nordic media wellbeing model’ has been coined. This model involves various mechanisms that ensure some public funding and support for the media. Partly for these reasons, journalistic media is doing well in Finland and enjoys a wide audience. In Europe, crises such as COVID-19 and Russia’s attack on Ukraine increased the consumption of journalistic media, but the same can’t be said for the United States.

Digital transformation and digital platforms and networks have revolutionised the way information is produced, disseminated and used. What’s more, data and digital power are falling into the hands of a few tech giants. Do you see any problems here?

One of the biggest challenges is that communications platforms do not consider themselves publishers in the traditional sense; they would then be required to adhere to certain publishing principles. In Finland, these are the principles laid down by the Council for Mass Media. Although communications platforms have become part of a democracy’s critical infrastructure, it was only very recently that some of them have begun to remove or label misinformation, in other words to take responsibility as required by publishing principles. But these actions still cover only a fraction of the information available to people.

The second and significantly bigger challenge is data collection. Platforms collect data on their users – all of us – and use it to create a detailed picture of our behaviours and preferences. They then use this data to influence us. All of this happens below the surface, without us even realising it. Sitra’s Digipower investigation looked into the mechanisms of profiling in the tech giants’ services platforms.

Is there anything we can do to stop this?

It is a tricky situation and can lead to people feeling powerless. But we can do something, and we do have the means available. Firstly, we can improve our digital awareness. This means understanding our rights, being aware of the digital trail we leave behind when we use online services, knowing which precautions to take, and knowing how to improve our information literacy. It is important to be able to recognise reliable sources. While it is a demanding task, it makes a big difference in terms of an individual’s autonomy. This applies to policy-makers and citizens alike.

Secondly, we can exercise our legal rights. The EU has assumed a significant role in regulating data collection and processing. The objective of regulation is to protect the privacy of individuals while promoting a free market economy.

Hybrid influencing and information operations have been widely discussed since Russia’s attack on Ukraine, which resulted in severe security tensions. How is this affecting Finland?

Although we have seen some information operations, no significant influencing attempts have yet come to public attention. According to hybrid and information influencing specialists, an extensive information campaign would require a massive operation that would also have to be linguistically and semantically credible. The fact that Finnish is such a small language can protect us from influencing campaigns targeting Finland.

Another probable reason is that Russia simply cannot afford to invest any resources in such campaigns right now. Ensuring a favourable opinion among Russians is of paramount importance in order to gain strong support for the war. Russia is also waging an information war against Ukraine, and to some extent it tries to influence people on global discussion platforms such as Twitter.

How should democracy change in the face of the transformation of information environment?

In our minds, democracy is something we take for granted; something that requires no action or improvement. But the fact is that in today’s digital world our representative democracy still reflects the principles forged in the industrial era. In Sitra, we refer to this as the analogous era, where things happened from the top down. But the digital transformation has given rise to a myriad of networks and has shifted power to networks. Take Ukraine, for example. With the help of networks, the country has been able to mobilise assistance, with citizens across Europe taking action to help, offering to accommodate refugees in their own homes, and sending private aid to Ukraine. Private companies offer assistance for running online activities and cyber defence, and organise campaigns.

Now that the role of representative institutions has changed from simply informing citizens of their decisions, institutional democracy is under pressure to reinvent itself and step into the digital age. That means making their processes genuinely digital and transparent. Such reforms would allow citizens to keep track of important legislative processes and discover opportunities for advocacy work. At the moment, we are – technically speaking – able to exert influence and participate, but it requires a great deal of effort and special expertise, which is not the ethos of the digital era.

Who is responsible for the reform of democracy?

For liberal democracy, continuous development is the only alternative if it is to survive the transformations mentioned above.

Responsibility for reform lies heavily on the democratic institutions, but the civil society and citizens have a big responsibility too. We can challenge institutions and demand change. In addition to networks, we should have active NGOs and think tanks like Sitra that urge institutions to join the rest of society in the 2020s.

We should recognise the value of democracy. Russia’s attack on Ukraine was a wake-up call that forced us to accept that there is a global battle between vastly different social systems. And while Finnish democracy performs well in international comparisons, it is just as easily swayed by global megatrends as any other democracy. If we value and appreciate democracy, we need to engage everyone in the joint efforts to defend it. Everyone has a role to play, and everyone is responsible. If we want democracy to prosper, we must take action.